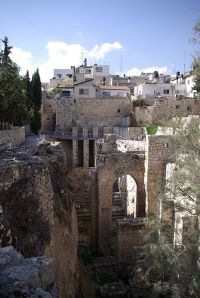 2 Now there is in Jerusalem by the Sheep Gate a pool, which is called in Hebrew, Bethesda, having five porches. 3 In these lay a great multitude of sick people, blind, lame, paralyzed, waiting for the moving of the water. 4 For an angel went down at a certain time into the pool and stirred up the water; then whoever stepped in first, after the stirring of the water, was made well of whatever disease he had.5 Now a certain man was there who had an infirmity thirty-eight years. 6 When Jesus saw him lying there, and knew that he already had been in that condition a long time, He said to him, “Do you want to be made well?”

7 The sick man answered Him, “Sir, I have no man to put me into the pool when the water is stirred up; but while I am coming, another steps down before me.”

8 Jesus said to him, “Rise, take up your bed and walk.” 9 And immediately the man was made well, took up his bed, and walked. And that day was the Sabbath.

The Pool of Bethesda is located in the city of Jerusalem in the Hill Country of Judah which is in the central part of Israel. In the first century, Jerusalem was part of the Roman province of Judea and was built upon a mountain with two valleys wrapping around it on either side (Hinnom Valley to the west and Kidron Valley to the east) and a valley cutting through 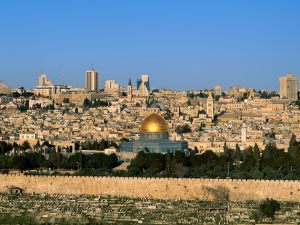 the center of the city called the Tyropoeon. Across the Kidron Valley is the Mount of Olives which rises above the heights of the city, and to the north of this mountain, it dips into a saddle and rises to form another ridge called Mount Scopus. The region in and around Jerusalem is dry most of the year with annual rainfall between 28-36 inches during the winter months. Throughout the spring (May to mid-June) the temperature is mild, yet it gradually increases as summer is a dry, hot, and dusty time, especially with its locality with the Negev desert to the south. During the summer, it is common for winds to blow in from the eastern and southern deserts to form a thick brown haze around the city called a sharav where the temperature spikes and the humidity can drop forty percent. The sharav dries everything and leaves a blanket of dust on the land, but in the area of Jerusalem and to the north the sharav also helps ripen the grains of barley and wheat for harvest. Finally, by mid-September to mid-October, the end of summer approaches, which ushers in the fruit harvest and the rainy season.

For the Jewish people, Jerusalem has always been the spiritual heart beat. It was in this city that David established his capital, Solomon reigned, the first and second temple stood, and where it is believed the Messiah will return. Jerusalem is a city over 3,000 years old, but is a place that has been identified as Jewish for almost all of its history. It was where Jesus of Nazareth was dedicated in the temple as a boy, would have attended the feasts, spent his last days teaching, observed the Last Supper with his disciples, was crucified, and then was resurrected from the dead to ascend into heaven from the Mount of Olives. Jerusalem was the pulse of religious Jews, and the birth of the Church, yet it was also a hotbed for ideals and under strict Roman control with the Fortress Antonia dominating the northwestern end of the Temple Mount. 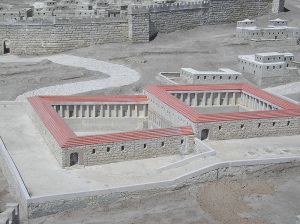 was arrested and crucified. Everything He did, He did for a reason as Jesus challenged social norms, called for repentance, and preached. After His arrival into the city upon the donkey where He was celebrated as a triumphant king, Jesus entered into the Pool of Bethesda, which is located slightly northeast from the Fortress Antonia and in close proximity to the Temple Mount. The central place of the pools was a prominent Gentile area where people who were ill and diseased gathered near the waters to be healed. The Gospel of John gives a brief description of this pool, mentioning that it has five porches; archaeology has shown this site to be a temple to Serapis (Greek: Asclepius), who was the god of healing. 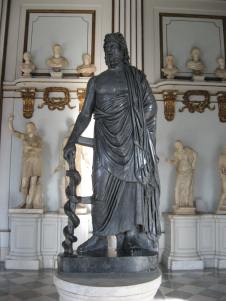 Serapis was a conglomeration of deities, created by Ptolemy I who was one of the successors of Alexander the 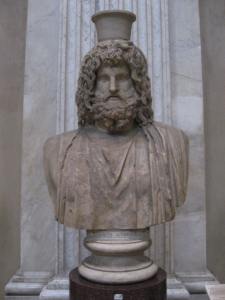 Great in 323 B.C. Serapis was believed to have a unique set of powers and was identified with sacred snakes as he took on the embodiment of Asclepius, a Greek deity of healing. Serapis was an appellation of Greek and Orient qualities that appealed to the Romans and, therefore, we find a temple set up with twin pools near the Fortress Antonia. Most likely the five porches also possessed a military chapel for the soldiers near the pools where people came to be healed. At the pools themselves, history reveals to us that the priests would send a snake into the waters and proclaim healing for anyone who could step in. Excavations have also shown pipes leading into the pools so that air could be sent through to create bubbling and a stirring motion which John also attributes to the angel (Asclepius could sometimes be pictured with wings).

At the pool, Jesus found a lame man who had been stricken with disease for thirty-eight years, had been unable to crawl to the pool for healing, and was abandoned as there was no one to assist him. This shows the character of Hellenism which venerates the body and, therefore, a sick or diseased man would have no place in Hedonistic thinking. Rather, the people most likely to be healed would be those with hardly any ailments at all who could reach the water easily. However, Jesus deliberately went to this place to declare war on Serapis, to show to everyone who the real Healer is, to rescue a man, and unlike Serapis, Jesus did not choose favourites. Therefore, this geographical place had a direct result in what Jesus wanted to do and what He wished to declare. He simply asked the man if he wished to be healed, the man declares his frustration and misery, and the man is healed. Jesus demonstrated who He was and declared to all the deception of Serapis and the priests. He did this without any doubt in the presence of many other sick and crippled people who were waiting for the water to stir.

An interesting discovery has just been made near the suburb of Tel Aviv called, Herzliya. This find has turned out to be one of the largest caches of gold treasure (100 pieces of gold worth over $100,000.00). The treasure, dates back to the period of the 11th century when the coins were minted in Egypt, and then buried later in the 13th century during the later half of the Crusades. They were discovered buried in a large vessel near the Crusader fortress of Apollonia, which saw much action during the time of England’s king, Richard the Lionheart and most likely around the time of the Battle of Arsuf (1191 AD- Third Crusade) which was between King Richard and the Mameluk ruler Saladin. Also uncovered were the remains of  weapons including, stone catapult missiles and a large hoard of arrow heads which all attest to the brutal siege and battles that were fought in this area.

Apollonia has also revealed connections to the Roman, Phoenician, and early Islamic periods which archaeologists have made extensive finds. The discovery of the gold and other artifacts is being carried out by a joint effort between the Tel Aviv University and the Nature Parks Authority of Israel.

I have attached a link to the website which was posted by Arutz Sheva 7 which is a major news outlet in Israel. So, if you wish to read the entire article then just click on the link http://www.israelnationalnews.com/News/News.aspx/157609 and it will open in a new window for you. Enjoy.

I came across a really fascinating article that I had to share. Anybody that knows the The Israel Antiquities Authority just recently uncovered a 1,600 year old synagogue in the lower Galilee, and in it they discovered a mosaic depicting the Biblical account of one of the most famous judges of Israel, Samson or Shimshon, in Hebrew. This is an exciting find and explained cleared through Yonah Bob’s article in the Jerusalem Post. So, you can just click on the link and read it for yourself and I am sure you will be impressed.