I invite you to explore the dark corridors of ancient history and see it come to life.

The study of ancient history has always fascinated me for as long as I can remember. Whether it be the image of Greek hoplites crammed together in a phalanx, or legions marching stoically across the battlefield I believe it has the power to ignite the imagination of the unknown. The ancient world, particularly around the Mediterranean and Mesopotamia, which is what I focus on, was a world very different then what we know today and has stirred poets, politicians, researchers, archaeologists, geologists, and many others to document their findings, write about history seen through their eyes, and try to grasp an understanding of how the ancients thought, behaved, and interacted with one another. This is the beginning of what it means to look into history.

We, in the 21st century, can only look through a key hole back through thousands of years of history and unearth what we believe happened based on evidence, be it archaeological and primary written sources. I believe that the study of history is tantamount to understanding how we have ended up where we are. It involves the exploration into our political society, how we function in society, make war, live our lives, and much more which is mostly based on Greco-Roman ideals. To understand the past can open up that key hole further in how we should and should not live our lives and what choices we should or should not take. As George Santayana said, “Those who cannot remember the past are condemned to repeat it.” I seek not only to remember and study the past, but to bring it to life through my writing and hopefully, God willing, give people a glimpse into ancient history of how the people of those times may have worshiped, thought, loved, ruled, fought, suffered, succeeded, died, and lived. We even see the fascination in culture and history taking place in the ancient world with figures such as Alexander the Great or Roman Emperor Hadrian (to just name a few).

“It is the echoes of the past that turn our ear to what has taken place, and this curiosity, entrenched in so many people, is something we cannot run from.”

Battles, sieges, suffering, and victory has always been the price tag of ancient civilizations as they struggled together in a changing world as empires and kingdoms marched on leaving many in the dust. Whether it was Spartans and Athenians, Macedonians and Persians, Carthaginians and Romans, or Seleucid’s and Ptolemies, all shook the earth, all changed history, and all were documented and recorded. To understand the ancients, we must turn to the witnesses and people living at the time and what they wrote. Often, we must understand that much of the ancient records of those days were intertwined with their mythological stances, such as Homer’s Iliad and Odyssey, or The Epic of Gilgamesh, there is still much to learn outside of these boundaries however, once we explore the ancient writing or what is known as primary sources. I personally have focused my time and studies on ancient Greece, Rome, and Israel.

However, there is also a greater picture of the people’s and nations living before and after these times which also have piqued my interest over the years which has deepened a desire to broaden my knowledge and appreciation for the complex and diverse world in the B.C.E. years. The timeline is long and the list even longer but the ample amount of rich stories, history, battles, governments, and search for power has never escaped the essence of mankind. I have enjoyed studying such people as the ancient Egyptians, Persians, Babylonians, Assyrians, Carthaginians, Hittites, Canaanites, Phoenicians, Etruscan’s, and many more. The fascinating thing regarding the wealth of knowledge that has been compiled in libraries and universities throughout the world is that even if you had a dozen lifetimes it would not be enough to fully grasp and master the ancient world. Thus, the primary sources are priceless as they offer one of our best ways to glimpse back through time at what life was like and how it happened.

For me, over the years I have amassed a collection of such sources in which I have studied to better aid my own writing and research as I work towards publishing and establishing myself as an author. Sources that were indispensable for my study were: Polybius, Livy, Caesar, Appian, Cicero, Xenophon, Dionysius of Halicarnassus, Plutarch, Homer, Virgil, Herodotus, Thucydides, Flavius Josephus, Plato, Socrates, Philo of Alexandria, and of course all other ancient texts (i.e. Dead Sea Scrolls, Book of the Dead), be they on papyrus, or chiseled into stone.

To grasp an understanding of Jewish history (whether it be pre-temple period or later) the Bible is by far my favorite source. Not only does the Bible shed light on the history of ancient Israel, it also builds an excellent picture for the nations surrounding it as this picture also corresponds with extra-biblical sources, archaeology, and geography. The Bible is vital in understanding the journey for the Jewish people, from Mount Sinai right up into the Second Temple period (with the Christian scriptures/New Testament). It shows their struggle against paganism, worldly pursuits, and how God called them to be a separate people and a light to the world. This is essential in understanding how the Jews would have thus perceived the Greeks and Romans (in later years) and why they reacted the way they did or rebelled, such as in the age of the Maccabees (167-160 B.C.E), or with the two Jewish revolts against the Romans in 66-73 C.E. and 132-135 C.E. The Babylonian Talmud and other Jewish texts such as the stories of the Midrash can also bring to light much of how the Jews thought, practiced their faith, and resisted the pressures from the outside world, mainly Hellenism, which is Greek lifestyle and hedonism in a nutshell. Also, 1st and 2nd Maccabees of the Apocryphal writings can assist in gathering together a picture of what transgressed and how things played out.

I also welcome you to find my author’s page on Facebook (which is currently in design) and “Like” it so you can stay connected to my writing endeavors. My desire is that my author’s Facebook page, will be a domain where people can interact, post questions, learn more about ancient Jewish history, and other interesting articles. I am also undertaking promotional videos for upcoming novels which I plan to publish. Here you will also find interviews and a promo trailer dedicated to my first published historical fiction novel, 70 A.D. A War of the Jews. On Facebook,  you can learn more about what inspires me, and what has led me to focus on telling the story of warfare in ancient Jewish history.

Peter was born in Toronto, Canada and currently lives in Jerusalem, Israel with his wife, Deanna. He graduated in 2006 from Prairie Bible College with two Bachelor degrees, one in Intercultural Studies, with a Minor in Biblical History, and the second in Biblical Studies: Old Testament. Recently he has begun his MA in Judeo-Christian Synergism. He has recently published his first historical-fiction novel about the Jewish revolt against Rome, entitled, “70 A.D. A WAR OF THE JEWS” and is working towards the next book in the series “WARS OF THE JEWS” entitled, “164 B.C. A WAR OF THE JEWS.” He has spent much of his time in parts of Europe and the Middle East and has conducted extensive research in Jewish, Christian, Islamic, Greek, and Roman history to support his writing endeavors. 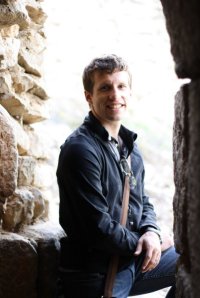 8 responses to “A note from the Author”